on Ruysch and his mummies, death, and pleasure.


Some time ago a friend introduced me to the NLM's Dream Anatomy Catalogue, from which I've found many amazing anatomical engravings and illustrations for inspiration. This is where I stumbled across Frederik Ruysch (1638-1731), a Dutch anatomist and a pioneer in techniques of preserving organs and tissue (a precursor to the BodyWorlds franchise?). Ruysch made artistic arrangements of his material and had his own museum of curiosities. Among the displays were a number of dioramas assembled from body parts and starring melodramatic fetal skeletons, flora and fauna. He was one of the first anatomists to venture completely from scientific documentation to ars moriendi, making surreal collages from the dead and discarded. 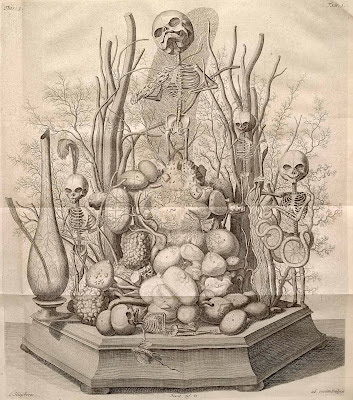 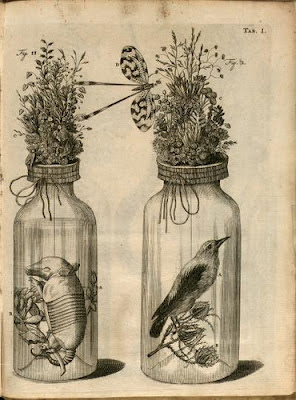 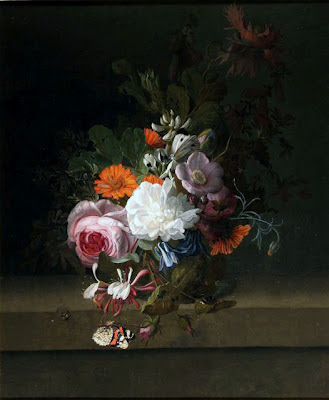 In Giacomo Leopardi’s "Dialogue Between Frederik Ruysch and his Mummies", written in 1824, Leopardi imagines Ruysch being awakened in the middle of the night by his specimens, who for a brief interval, are granted the power of consciousness:

RUYSCH. …but since time is short and leaves no choice, let me know in brief what kind of sensations of body and mind you experienced at the point of death.
MUMMY. I didn’t notice the actual point of death.
THE OTHER MUMMIES. We didn’t either.
RUYSCH. How come you didn’t notice it?
MUMMY. Just as you never notice the moment you begin to sleep, no matter how much attention you pay.
RUYSCH. But to fall asleep is natural.
MUMMY. And you don’t think dying is natural? Show me a man, or an animal, or a plant that doesn’t die.
RUYSCH. I’m no longer surprised that you go on singing and talking if you didn’t notice when you died. ‘Unwitting of the blow, he went ahead/Combating still, and yet already dead,’ writes an Italian poet. I thought that on this question of death, those like you would know something more than the living. But going back to our subject, at the point of death didn’t you feel any pain?
MUMMY. What kind of pain can it be if one who feels it doesn’t notice it?
RUYSCH. At any rate, all are convinced that the sensation of death is extremely painful.
MUMMY. As if death were a sensation, and not the opposite…
RUYSCH. Then what is death if it’s not pain?
MUMMY. Pleasure rather than anything else. You should know that dying, like falling asleep, does not take place in an instant, but by degrees. True, these degrees are more or less greater or smaller according to the variety of the causes and to the kinds of death. In the last moment, death brings neither pain nor pleasure, no more than does sleep. In the preceding moments it cannot produce pain because pain is something alive, and, at that time, that is, after the beginning of death, man’s senses are moribund, which is like saying weakened in the extreme. It may well be a cause of pleasure, for pleasure is not always something alive; in fact, most human pleasures consist in some sort of langour, so that man’s senses are capable of pleasure even when they are near extinction since very often langour itself is pleasure, especially when it frees you from suffering; for, as you well know, the cessation of pain or discomfort is in itself pleasure. So, the langour of death ought to be the more welcome as it frees man from greater suffering…